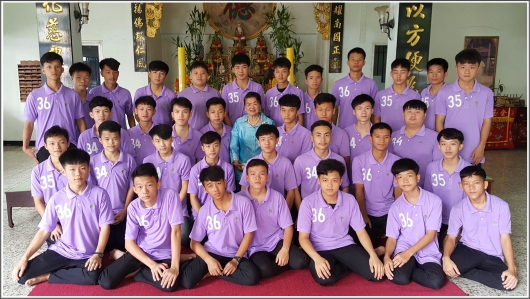 Hotelier Malee Tangsin and 35 of her scholarship boys.

In November 2018 Forbes Asia‘s 12th annual philanthropy issue honored a total of 40 generous people or families from Australia, Hong Kong and 13 Asian countries. I wrote about Malee Tangsin, 90, Chairwoman of Bangkok’s Ramada Plaza Menam Riverside Hotel. She and her family foundation have supported 450 boys while they attended high school in Bangkok. The photo shows the current three “classes,” most of whom are from Hmong or Akha hill tribe villages. More here.

This story appeared in the August 2018 issue of Forbes Asia as “Riverboat Queens.”

Supapan Pichaironarongsongkram is explaining the art of managing the tough men who operate her 90-strong fleet of ferries, commuter boats and charters that ply Bangkok’s Chao Phraya River. “When you work with men, you don’t work as a woman and a man. A man will always look down on a woman. They probably don’t think I know much. I go to them as a friend or mother. I protect them. If they know that, they will trust me. They know they will never lose a job. We work through generations of trust.”

Supapan, 73, represents the third generation of women at the helm of Supatra & Chao Phraya Express Boat Group. Her grandmother started the ferry service roughly a century ago–the exact year is unknown–and when she died in 1931, Supapan’s mother took over at age 20 (see Thailand’s Supatra Dynasty – 4 Generations Of Women Running The Chao Phraya River). Today the group comprises ten companies and 600 employees, and the fourth generation is getting ready to take over. Supapan’s 32-year-old daughter, Natapree, better known as Pim, has been building the group’s advertising sales, hotel and real estate businesses for the past six years.

Supapan is petite, soft-spoken and impeccably groomed. If she hadn’t felt a sense of responsibility to carry on the family business, she would have followed a more genteel line of work, perhaps using her French degree or pursuing a career as a pianist. But, says Pim, her only child, her mother’s benign appearance is deceptive: “She works six days a week. She doesn’t have an engineering degree, but she knows all the specifications of the boats, the materials, the buoyancy required for the boats to float, the width of the river, the depth of the river. She will act like she doesn’t know much, but she knows everything. You cannot mess with her.” MORE

I included a link and caption to this rare digitized footage of the 1926 funeral of Thai King Vajiravudh (aka Rama VI) to accompany a pair of travel advisory stories I wrote for the South China Morning Post related to King Bhumibol’s funeral rites in October 2017. The actual cremation took place on the evening of October 26, preceded by a half-dozen processions that day and by five rehearsals in the days before that. (The gist of my stories: Don’t even think that you can get close enough on October 25-27 to see anything in the vicinity of the funerary structures.)

The video caption I wrote was edited down a lot, so I don’t think readers could draw much from it. Early on in the video, that’s Vajiravudh’s brother, King Prajadhipok (Rama VII), presiding over—by pulling a specially made rope—the raising of the Royal Six-Tiered Umbrella to a spire atop the multi-story wood crematorium. That ceremony occurs a few days before the actual cremation; this year it took place October 18, with Thailand’s new king, Vajiralongkorn, presiding.  END_OF_DOCUMENT_TOKEN_TO_BE_REPLACED

The funeral of King Bhumibol Adulyadej involves five days of ceremonies. Venues will be closed, traffic will be disrupted and massive crowds are expected around the royal palace. Here’s how to view this historic event.

The five days of funeral ceremonies this month for Thailand’s late King Bhumibol Adulyadej will truly be fit for a revered monarch who ruled for 70 years. Ceremonies will draw on Buddhist and Hindu rites dating back hundreds of years and will take place in and around a cluster of temporary wooden structures north of the Grand Palace that architects and artisans have been labouring on for most of this year.

However, visitors to Bangkok from October 25 to 29 should give up any thought of attending the site of ceremonies in person. Especially on October 26, the day of cremation, they instead should be prepared for traffic disruption, closures of public and private venues, and massive crowds in the vicinity of the old royal city. MORE

Tourist alert! Three people are dead and 22 people are injured in Bangkok after a gunfire and grenade attack on a new protesters’ site early Thursday morning. The anti-government PDRC camp is close to the Democracy Monument–in the city’s prime tourist area.

The deadly violence achieved one of the immediate goals of the anti-election PDRC protesters: parliamentary polls set for July 20 have now definitely been postponed by the Election Commission. The commission’s secretary-general indicated Thursday that the elections are being postponed rather than cancelled: “The situation has to be right and accommodating for an election to take place … We don’t think this is the right time.”

Were members of the  UDD (United Front for Democracy Against Dictatorship), the so-called Red Shirts who support the present Pheu Thai Party caretaker government, responsible for the shots and grenades last night?

As in most previous incidents–28 people have died since last November in violence related to the protests–we may never know.  The grenades and guns were wielded by occupants of a pickup truck that plowed through the protest camp. But the responses of the military and Electoral Commission certainly aren’t what the pro-elections UDD is seeking. The Army chief, General Prayuth Chan-ocha, warned Thursday that if unrest continues, “it will be necessary for the military to launch a full-scale effort to end the violence.” MORE

BANGKOK–Two Chinese Muslims are set to go on trial in 2016 on murder charges stemming from last August’s bombing that killed 20 people and injured 125. Thai authorities don’t appear eager to probe into their accomplices or motives, however. Nor will they charge the two with terrorism, despite the web of foreigners implicated in the pipe bomb explosion at a popular Hindu-Buddhist shrine in central Bangkok.

The first man to be arrested, Bilal Mohammed, originally claiming to be a Turkish citizen called Adem Karadeg, was discovered August 29 in an apartment in a Muslim neighborhood of northeastern Bangkok. In the same apartment were several hundred forged Turkish passports and a cache of bomb-making components–suggesting that more attacks might have been planned.

Only in late September did Thai police claim that 27-year-old Bilal was the “backpack bomber” himself–the yellow t-shirted man who left his pack containing a 5-kilogram pipe bomb on a bench at Erawan Shrine shortly before the explosion. According to his lawyer, Bilal has now confessed to the crime. Bilal previously said he had arrived in Thailand–with the help of traffickers–four days after the bombing.       MORE

The King in Exile: The Fall of the Royal Family of Burma by Sudah Shah (Harper Collins)

MYANMAR’S LAST ROYAL FAMILY, summarily ousted by British colonizers more than 125 years ago, hasn’t been a sensitive subject since independence in 1948. But less than three years ago, The King in Exile by Sudha Shah might have run afoul of censors just for noting that Taw Phaya Galae, a grandson of the last Burmese royal couple and one of her sources, served a stint in prison after participating in the squelched 1988-1990 democracy movement.

It is one of many signs of change that an edition of Shah’s family biography, already available in English in Myanmar, will soon be published in Burmese.

For the past two years, Myanmar’s military government has assumed a gentler, less martial face as it bids to welcome tourists and Western investors. After nearly 20 years of house arrest, opposition leader Aung San Suu Kyi won a seat in Parliament in 2012 and ventured abroad to collect her 1991 Nobel Prize and other laurels. The strides the country has taken toward greater freedom of expression in the past two years have received less attention, but are also important.    MORE